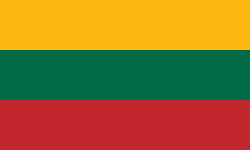 Lithuania is an exciting and developing country in the Baltic, with numerous and prestigious academic institutions spread throughout the country. Today there are two universities in Lithuania that offer English programs for international students: the Lithuanian University of Health Sciences and the Vilnius University.

Lithuania is located in the north-eastern part of Europe and is one of the Baltic states.  In 1990, Lithuania became the first soviet republic to declare its independence, in a step that ultimately led to the fall of the Soviet Union. Lithuania actively sought closer relations with Western Europe, and became the first Baltic state that applied for membership in NATO. Lithuania became a full member of the European Union in 2004.

The level of literacy in Lithuania is extremely high, and the country holds one of the highest percentages of university graduates in the world. In addition, 90% of Lithuanians speak a second language, and 50% of the population speaks two foreign languages, mostly English and Russian.

Today, 15 public universities and 6 private colleges operate in Lithuania. Lithuanian University of Health Sciences in Kaunas is the second largest university in the country and offers three programs in English for international students: general medicine, dentistry & pharmacology. To study medicine in Lithuania is growing in popularity among international medical students.

Interested in studying medicine in Lithuania or other countries in Europe? Read about Medical Doctor’s pre-medicine course that guarantees your readiness for the entrance exams.