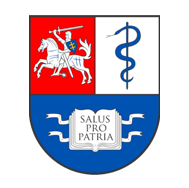 This university is represented by “Medical Doctor” in all its branches around the world.

Nowadays, over 7,700 students attend the various study programs offered by the university of which over 1150 of them are international students.

Kaunas is the second largest city in Lithuania, and keeps the authentic spirit of the country‘s national character alive. The city is located at the confluence of the two largest Lithuanian rivers, surrounded by the hills and situated at the crossroads of the most important roads in Lithuania. Due to its geographical position, today, Kaunas is Lithuania‘s most important center of communication.
It is a home of a variety of festivals & events, from operettas to modern dance, from classical music to Jazz. Kaunas was chosen as the European Capital of Culture 2022,  and as the Capital of Culture 2022, Kaunas is changing: from the TEMPORARY CAPITAL to CONTEMPORARY. The city is famous for its Interwar architecture which was awarded the European Heritage label and is on its way to UNESCO. Kaunas is the only city in the world where so much of the style of the buildings has survived to the present day.
Kaunas is not only a city of old traditions, but also a large centre of business and industry. It can also lay claim to being a city of young people with over 35,000 students (the largest number in Lithuania) studying at one of the seven universities here.
Green streets, tree–lined avenues and wide–open squares create surroundings to match everybody’s moods. Kaunas is proud of its great number of museums, theatres, universities, colleges, fine hotels, restaurants, cafes and bars. Guests can try a range of cuisine from many European and Asian countries as well as an abundance of traditional Lithuanian food, drink and hospitality.

** Prices may be updated from time to time, so it is advisable to check on the university website as well.